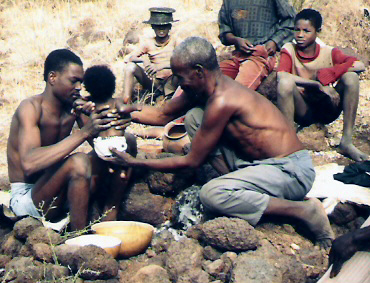 Tanggbain-segrika in Wiaga-Sinyangsa: After the sacrifices the child is placed on the sacrificial stone.

A class four mock examination at Sinyangsa Junior Secondary School included the following question: "What is the difference between traditional religion and the two other religions [Christianity and Islam]?" I found it difficult to give a concise explanation. The expected answer was: "Traditional religion has no founder". This is a reassuringly solid answer, most of the other research results are less definitive.

A hundred years ago, Europeans would have been able to list a dozen aspects of "pagan" religion (as they used to say at that time) without any difficulty all emphasising the superiority of Christianity as compared to "paganism", e.g. members of traditional religions believe in many gods including animals, trees, stones and other lifeless things, so-called fetishes; they indulge in cannibalism or other cruel or disgusting rituals, magic is more important for them than religion and their mythological and theological constructs are confused and bare of any reason.

Today there is a general agreement that none of these aspects apply to traditional Bulsa religion. To find access to this religion, we are currently trying to examine some essentials of their dogma and their religious practices.

I) Belief in a Supreme Being, the "God of Heaven" (Naawen)

He is omniscient, eternal, almighty and the creator of heaven, earth and all living beings. These qualities did not only cause Christian and Islamic theologists to equate him with their own God, even the name Naawen was adopted in the divine services of catholic and protestant churches.

II) Belief in other supernatural beings and their shrines (bogluta)

Naawen himself does not receive any sacrifices personally, but is the final receiver of the offerings to other divine agencies. These supernatural beings venerated by the Bulsa may be classified in the following groups:

1. Male and female ancestors: kpilima or koba, ma-wena, ma-baga. As male ancestors are usually owners of land and cattle, possessing their shrines is also of eminent economic and social relevance. Succession to the office of the guardian (kpagi) of an ancestral shrine is by generational seniority, not by old age so that old bogluta - and with them land and cattle - may rotate through lineage segments of different size.

2. Earth-shrines: tengsa, tanggbana, teng-kue (sing. teng-kuk). While in some other ethnic groups of Northern Ghana only one supreme earth-shrine is venerated by a whole village/town, Bulsa tanggbana are independent from one another and more numerous. In Wiaga alone I was able to interview the "earth- priests" (teng-nyam, sing. teng-nyono) of 42 tanggbana/ tengsa, objectified in groves, rocks, trees, rivers etc., but there are certainly more.

3. Medicine shrines: tiim-bogluta, e.g. nipok-tiim, peintiik and others. Unlike most other bogluta, medicine shrines can be bought, even from foreign ethnic groups. My late friend, Mr Leander Amoak (Moak = Mossi-man), got his name from a tiim-bogluk that had been purchased from the Mossi.

4. Ngandoksa (sing. jadok): These are usually animals that may be venerated in a clay shrine, e.g. a chamaeleon relief on the main grainstore. They can even force a person to become a soothsayer/diviner (baano). Diviners play an eminent role within Bulsa traditional religion, because they (or better "their ngandoksa") are intermediators between ordinary human beings and the divine powers. In a divinatory consultation they may discover ritual mistakes made by their clients, the reasons for diseases and other misfortunes after which by means of their symbolic code-objects, they advise their visitors what kind of sacrifices must be offered to appease the divine powers.

5. Juik-shrines: the veneration of the mongoose (probably Herpestes sanguineus, dwarf mongoose) is especially common among the Southern Bulsa, but also in Wiaga. Probably this cult exists only among the Bulsa and Koma within the borders of Ghana.

6. Some other shrines have exceptional status, as for example the ngmoruk-shrine (often called "raingod"). Apparently there is only one shrine of this type in every Bulsa town, in Sandema the ngmoruk-bogluk is in Kobdem, the ngmoruk of Yimonsa is responsible for the whole of Wiaga, and in Kadema people of Akusung Yeri (Kpikpaluk) sacrifice to the rain-shrine for the whole village..

7. Some Bulsa compounds possess a Tongnaab or Ngiak, a satellite shrine of the great Tallensi sanctuary of Tongo. Each year before the rainy season (February, March) a group of Tallensi will come to sacrifice to these shrines in Bulsa compounds and collect gifts (usually animals) for their Tongo sanctuary.

Among the Bulsa the main form of venerating supernatural beings is sacrifice. Nearly every ritual includes a sacrifice and every sacrifice is multifunctional and may be performed for a variety of reasons. It may include prayers, promises, ordeals and oracles. It may stabilize the social relations of the sacrificing group (no sacrifice is allowed if there are any conflicts among its participants) and it may have the function of sharing an animal among a lineage group and providing a meal to those attending the sacrifice. The main purpose, seen from an emic point of view, is to provide food for the divine spirits, thus gaining their favour and averting actual or potential harm.

Most of the Bulsa rituals concern the human life-cycle (as rites of transition, "rites de passage") and the agricultural year. As in nearly all the world's religions each transition to another phase of human existance or social status is marked by rituals, the most important of which among the Bulsa are as follows:

1. Pregnancy: poi (logi) nyatika: the public announcement of a pregnancy by shedding water on the sleeping pregnant woman und tying a string around her waist (miik bobika).

2. Birth: e.g. pobsika (blowing ashes with certain members of the family) and drawing black crosses on certain spots of the compound.

3. Segrika: The child is dedicated to a divine spirit (segi) and is given an official Buli name (see photo above).

4. Wen-piirika: The child receives its personal wen, which will be venerated as an ancestral wen after its death. 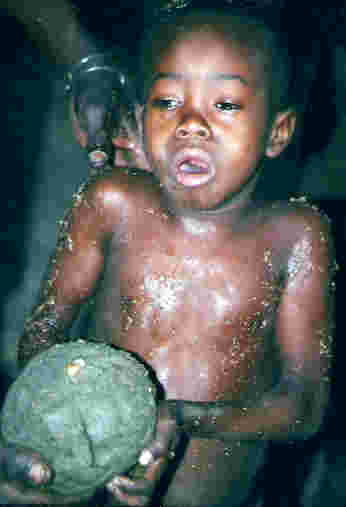 Wen-piirika: A small boy is carrying his new bogluk (shrine) into the compound, where it will receive its first sacrifices.

5. Marriage: Rituals separate the bride from her parental lineage and preparing her incorporation into her new family.

6. Funeral rites: These are the most extensive (and also the most expensive) Bulsa rituals. Apart from the burial rites (e.g. darika, 'announcement', noai boka, 'oracle of the mat', tapili yika, 'hanging up the mat') the Bulsa know two funeral celebrations (kumsa and juka or ngomsika) with the main function of preparing the transition of the deceased from their former sphere of life (family, compound, village) to the "land of the dead" (kpilung).

For the Bulsa, the majority of whom still engage in farming, the agricultural rituals consist of sacrifices to all the divine spirits of a compound. In the sacrifices before sowing, the sacrificer asks for a good harvest, and in the more important fiok-bogta ('first-fruit sacrifices') he thanks them for providing fertility to their field and their new crops.

Prayer is an essential part of all sacrifices, but nevertheless it has qualities different from those of other religions. For the Bulsa, prayer is part of an action and is action itself, nearly always spoken in a community during a ritual. An adherent of traditional religion will never pray in his private room, but only in front of bogluta. Although the divine agencies can understand prayers in all the languages of the world and even such murmured in an unintelligibly low voice, they cannot accept a prayer which is not spoken aloud.

This may demonstrate again that traditional Bulsa religion can only reasonably be practised in a community, i.e. the family or a smaller or larger segment of the lineage. It also explains why there are no missionary activities for this religion and why its members are extraordinarily tolerant towards other religions (e.g. Christianity and Islam) as long as their own religious practices are not endangered or restricted, for traditional Bulsa religion is not primarily a creed but a ritual system.

1988 Bulsa Traditional Religion and Moral Values as Portrayed in Stories, Thesis presented in partial fulfilment of the requirements for the degree of Master of philosophy in African studies, Institute of African Studies, University of Ghana, Legon

1999 'Doglientiri': An Institutionalized Relationship between Women and its Social Implications among the Bulsa of Northern Ghana. Africa 69,1. 87-107.

2003 Death and the Dead in Folktales of the Bulsa in Northern Ghana. In: F. Kröger and B. Meier (eds.): Ghana's North. Research on Culture, Religion, and Politics of Societies in Transition. Frankfurt am Main, Berlin, Bern, Bruxelles, New York, Oxford, Wien: Peter Lang, pp. 293-312.