Robert Asekabta: Some Facts and Data

Some Facts and Data

The 2019 Annual Feok Festival was held in Sandema on the 21st December, 2019 on the Bulsa Traditional Council durbar grounds, with Mr. Apaabey as chairman of the occasion. The expected Guest of Honour was the Upper East Regional Minister, Mad. Paulina Tangoba Abayage, who was attending other state assignments and could not come. But she was represented by the Chief Director / Regional Coordinator of the Upper East Region, Alhaji Mahamadu Azonko who is also a Divisional Chief in Bawku.
The Sandemnab and Paramount Chief of the Bulsa Traditional Area thanked the government for the development projects especially the construction of the Santijan bridge linking the Bulsa North District to the Upper West Region. The project was dear to the heart of the late Nab Dr. Azantilow Ayieta, builder of modern Bulsa.
The Sandemnab advised the people to make conscious efforts to eradicate the habit of cutting down sheanuts trees for charcoal but rather to safeguard and protect them for using their fruits as nutritious food and extract sheabutter oil from the nuts. He admonished the people who do excessive drinking to stop such a habit.
The Feok Festival was preceded by games of the football league among the sections in Sandema. The people rather called for a league involving the two districts.
The archery competition took place on December 20, 2019. 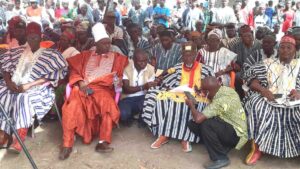 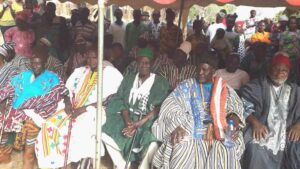 The visitor in the green dress, a secretary of the Bawku Naba, led the delegation to the festival. He is Mr. Thomas Abila, a one time Deputy Minister of Youth and Sports in the Liman Administration.