The people of the Bulsa Traditional Area celebrate Feok Festival. The festival is celebrated as a thanksgiving to the gods and remembrance of the gallant victory by their forebears against slave raiders. Feok, which means bumper harvest, was originally celebrated by households as thanksgiving sacrifice to the gods for their harvest. During the reign of Nab Sir Dr. Azantilow, he made the individual household celebrations to climax in a formalized mass gathering. Remembrance of the victory against slave raiders by warriors of Buluk was included in the celebrations. This legacy of late Nab Sir Dr. Azantilow has lived to this day. High profile government officials, including Presidents of the state, graced the occasion with the chiefs and people of Buluk.
The spectacular colourful scenes of the event invite much interest and attention to the occasion. Many people of walks of life grace the annual occasion. It is an occasion that brings home many of the sons and daughters of Buluk to partake in the festival activities.
The 400 years anniversary of slavery saw the President of Ghana, Nana Addo Dankwa Akufo-Addo declare 2019 as “The Year of Return” for descendants of Blacks forcefully taken as slaves. The Year of Return saw many African Americans visiting Ghana to pay hom 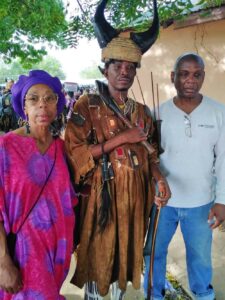 The Afro-Americans, one of them in the dress of a Bulsa warrior

age to their ancestral roots. Among these visitors were three African Americans who travelled from the United States to Buluk with a daughter of Buluk by name Sadia Nuhu.

The visitors first paid homage to the Sandema Chief, his royal highness Nab Azagsuk Azantilow and his elders. They were warmly welcome. During the exchange of pleasantries, the visitors could not hide their admiration of the well-read Nab Azintilow’s (II) superb knowledge of key figures in the United States such as Louis Farrakhan. The visitors offered some gifts to the chief and his elders. Afterwards they went to watch the archery competition. The following day which was the day of the Feok Festival, the team visited the Azagsuk Shrine in Fiisa in their newly bought smock wears. In reverence to the holy grounds of the shrine, every footwear was taken off before mounting the hilly rocky shrine. 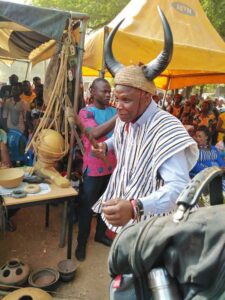 An Afro-American at the Feok exhibition of the BHCS

grand finale of the Feok Festival at the durbar grounds. They visited the stall of Bulsa Heritage and Cultural Society (BHCS). David Angaaba, the lead resource person, gave lectures on an array of the collection of Bulsa traditional artifacts. They were thrilled by the use and significance of the artifacts. They took pictures in mock use of the artifacts. They had a lot to feast their eyes on. They beamed with smiles as they enjoyed rhythmic stylish moves of dancers midst cheers from the crowds.
The war dancers in their colourful but frightening costumes finally took stage and eyes pooped without blinks in awe of their breathtaking showcase. Their unison of stamping feet and manly shouts of “Chaaso” shook the ground in report to the ancestors of their will and zeal to continue to protect the ancestors’ legacy against slave raiders. The action packed activities finally ended.

At the lodge of the visitors, they role played the war dance with much pride. They were visibly happy to know that Africans like the Bulsa people fought against the slave raiders. They now know that the narrative that Africans themselves sold their kinsmen into slavery and did nothing about it is untrue. The despicable acts of a few African black sheep in the slave trade is not a representation of a wholesale complicity of Africans in the slave trade.

The homely reception and the visitors’ new found knowledge of the gallant warriors of Buluk against slave raiders, I believe contributed in having them request to adopt Buluk as their ancestral home. Their request was gladly honoured. A ram (for the males) and a cock (for the lady) were sacrificed in a ceremony called “Yue Segrika” to give the “new born” Buli names. Victor was named Asandem, Ortis, Anyawen and Bernice Asieklie. Necklaces of polished horns of the ram were given to the men.
The visitors offered thanks of gratitude for the warm reception they had received and promised to share Buluk with other people when they got back to the United States. They hope to return once more to grace the occasion and have a morsel bite of our sumptuous meals of TZ and leafy vegetable soups and dawadawa jollof as they would miss these meals.
Feok Festival holds great potential for tourist attraction both within and outside the country. To achieve this, adequate investment has to be made into it. There should be weeklong activities of our cultural heritage that climaxed to the ground durbar. The activities should be properly packaged and advertised in various media to the world over. Historical sites such as Akum Cham, a shea tree under which slave raiders were reportedly killed, and caves of refuge e.g. Wiaga, Yemonsa cave etc. which are fast fading away should be developed and protected to add to our repertoire of tourist sites. Furthermore, the hospitality industry should be supported and regulated to provide standard services to visitors. The economic value chain that a properly advertised and organized Feok holds, will cut across most sectors of Buluk to create wealth and alleviate poverty.
I would therefore urge major stakeholders of the Feok Festival such as the Builsa North and South district assemblies and the traditional rulers to work at branding and commercializing the festival. If it requires hiring a consultant and experts in the tourism sector, we should not hesitate to do so. The economic prospects are too huge to be ignored. 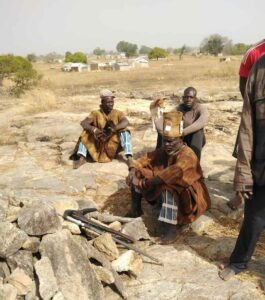 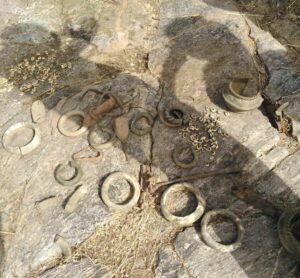 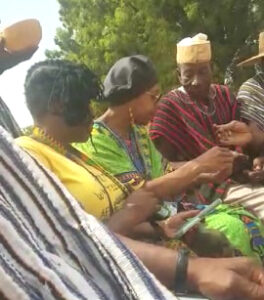