First printed in  “The Road to Sandema”

The 2019 edition of the Feok festival witnessed a great display of culture and tradition as usual. The spice of this year’s celebration was the display of cultural artifacts by the Bulsa Heritage and Cultural Society [BHCS] being spearheaded by Mr John Agandin. This year, a stand was allocated to the group to exhibit all manner of cultural materials. Peopl 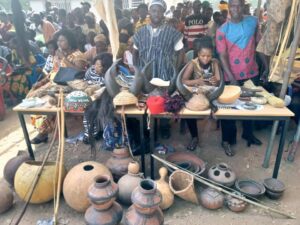 Stand of the BHCS with the display of cultural artifacts

e who visited the stand were thrilled with the history and meanings of various items. Kudos to the brains behind this novelty.
Buluk was not left out of the Year of Return as announced by President Nana Akufo-Addo about a year ago. Mr Martin Akandawen was able to get in touch with some three Bulsa and brought them home. They were oriented to various historic places and later given Buli names. Congratulations to Martin and all who helped in the process.
Unlike last year, when politicians advertised the festival because the president was coming to grace the occasion, publicity for the Feok festival this year was very low. I chanced upon a small banner in front of BUCOBANK. That was all organizers could do by way of advert and it got me thinking why things were done that way. Well, I was told there was not enough money to do anything better than that.
This year, organizers of the annual celebration did a very poor job as many things went back to “factory reset”. Many people expected organizers to have built on the successes chalked last year but were left utterly disappointed. The festival witnessed very low patronage this year unlike last year when it witnessed a very high patronage. Invited guests also failed to show up because the Feok festival grand durbar celebration clashed with their political program. No minister was available to attend our program because, honestly, they must honor what makes them relevant to us first before honoring other things.
Many people who showed up to witness the celebration expected to see the Vice President, Dr Mahamadu Bawumia, in attendance but were told at the last hour that he could not make it because of an NPP conference that was taking place in Accra for which he was expected to be present. Because of this program, many dignitaries failed to show up. The program was left barren. I am not saying the presence of the invited guests is what makes the program well organized but, their presence counts a lot to the success of the Feok festival celebrations. How the organizers did not consult broadly before fixing the date beats my mind.
In a conversation with some elders, they blamed the low patronage of this year’s Feok festival on the Bulsa Cultural Festival (Bulsa Feok Festival – Accra Chapter) which took place in Accra a few months to the main Feok festival celebration. They have suggested that that celebration be stopped if we are to expect an increase in patronage for the main Feok festival in December. They said the main reason which used to bring many people home was because they missed the celebration and had to do all they could to come witness it but since it could easily be felt in their ‘backyard’ there was no need to travel long distances home.
Some youth also blamed organizers of the Accra Feok for not doing anything to support the organizers back home but have taken the Feok festival as a cash cow for personal interests and aggrandizement. They quizzed where proceeds from the Accra Feok go and what benefit it brings to Buluk.
Apart from the issues above, organizers of the Feok festival are yet to consider an annual Feok project for which funds can be raised to execute in order to help make the Feok festival a development tool. This issue has been discussed widely but I cannot fathom why it has still not been adopted by the organizers. 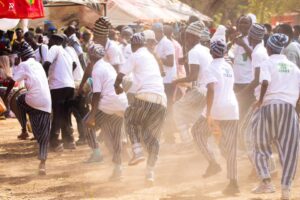 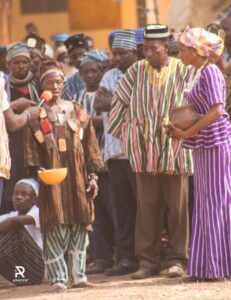