My Life and Career 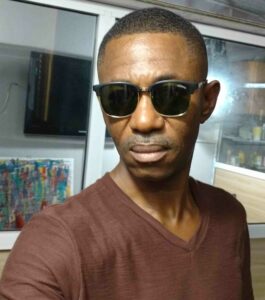 I was born in Accra on 18 January 1980, but I hail from Kanjarga, Builsa South district UER.

My late father, Seidu Asoakatoa, gave me my first lessons in art. Being the last born of nine siblings gave me the opportunity to hang around him much longer and to pick a few of his natural gifts. He loved to carve, weave, mould with clay, compose and sing Builsa songs and even draw. He was the true definition of a ‘jack of all trades’ in the arts. His early contact with Europeans, as he worked as a cook, gave him a head start as one who appreciated the benefits of formal education, and, therefore, he invested his last penny to ensure we all had a taste of formal education. He inspired my art greatly as he would often admire my charcoal or chalk drawings that adorned the walls of our home. Later in secondary school, I painted his portrait which he carried to show to all his friends and visitors in the 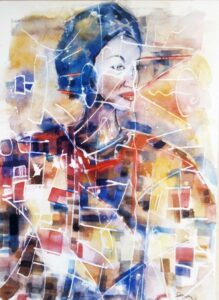 village. Apparently, he was the only person in the family who took a great interest in my artistic prowess/ exploits.
Again, the Builsa culture in general had an impact on my art, e.g. pottery, carvings, music and architecture, as every home was adorned with beautiful mural paintings executed by women. The physical environment was also littered with often broken ceramic ancestral figurines especially on the farmlands known as ‘gugta’ [guuta] in Buli, indicating earlier human settlements there (endnote 1). In addition to the beautiful landscapes of the North, the people, especially women, often dressed colourfully on market days. All these rich cultural experiences have immensely influenced the themes in my paintings throughout these years.
I started my formal education at a primary school in Kanjarga, in the mid-70s and continued in Tamale. I had both my O’ and A’ Levels at Tamale Secondary School and Ghana Secondary School, respectively. After successfully passing my A’ levels, I was admitted to the Kwame Nkrumah University of Science and Technology (KNUST), College of Art, in 1991, to pursue a bachelor’s degree in Art. I successfully completed with a second- class honours (upper division) in painting, in the year 1996.
My paintings have been influenced by both Ghanaian and international contemporary artists, notably, the famous Ghanaian painter, Ablade Glover and the renowned Spanish painter, Pablo Picasso, to name a few. I have, however, over the years, evolved as a painter often experimenting with lots of different materials to make my artworks more unique and individualistic. I loved the tactile feel of the paint or any material I employ as a collage on canvas or paper. I love to see some sculptural or three-dimensional aspect of my work as the images seem to emerge or protrude from the support spontaneously.
My initial paintings as a professional painter were mostly in the watercolour and oil media. These early paintings were realistic depictions of the everyday lives of the people, architecture and landscapes of the North, particularly Buluk.
Lately I have switched to painting with acrylics, but I am often experimenting with other materials such as wood, fabric and metal on paper and canvas.
My paintings have become more semi-abstract and expressionistic in style giving a more personal and contemporary interpretation of my culture.
I started exhibiting and selling my paintings, even before I completed university. After school, I was represented in art galleries such as The Loom, Accra and Ahema Art Gallery. Currently, I am represented at the Artists’ Alliance Art Gallery, Accra.
I have participated in both solo and group art exhibitions, both locally and internationally:
Solo Art exhibition in Basildon, Essex. UK 2000
Group Art exhibition The Golden Tulip Hotel, Accra, 1996, 2003 and
Black History Month, London, UK, 2000, 2001-2005
Currently, I am a part-time professional painter, as I work as a civil servant with the Ministry of Education. I took a long break from painting (2005-2014) to pursue other occupational careers, but I realised I just couldn’t give up painting. I therefore picked up my brushes and have since not looked back. I do hope to paint full time in the near future. 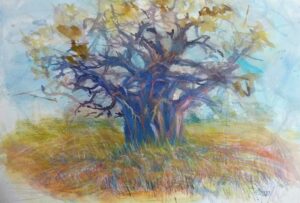 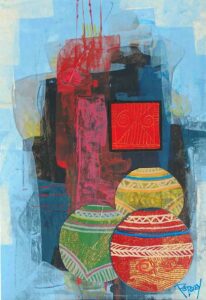 Saala-Biik’s artistic development, as seen in his works, comprises a number of modern styles which influenced him to varying degrees. His early creative period in particular can be described as having a realistic style (Fig. 1). In terms of content, these early works often treat working people, especially women, as fully dynamic while most of his later works have a rather static character and radiate a soothing calm.
An incipient dissolution of solid forms is already evident in the early period (Fig. 2 and 3), and some of his paintings take on expressionist traits in some cases. Above all, however, Cubist tendencies with clear forms, rectangles and circles can be seen in many of his late works without realistic elements disappearing completely (Fig. 4 +6). Other abstract paintings are completely detached from the figurative way of painting (Fig. 8).
Although Saala-Biik has been strongly influenced by modern African artists (e.g. Ablade Gover) and Western art styles, several of his paintings reflect his northern Ghanaian homeland. For example, the paintings depicted in Fig. 5 and 6 show highly stylized buildings of a traditional homestead as they appear in his own ethnic group, the Bulsa. Furthermore, the traditional clothing worn by the women depicted in the paintings demonstrates the broad colourfulness of his West African homeland (Fig. 5). 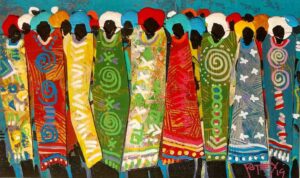 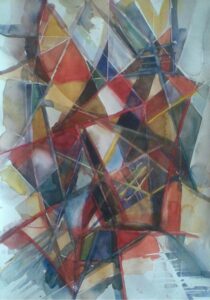 1.  Saala-Biik, after having been shown terracotta photos from Yikpabongo, identified them as specimens of the old Komaland culture.