In 2001, when I collected children’s drawings in Wiaga, a young man addressed me and handed me a pack of 32 drawings asking whether I could use them for my journal (BULUK). Later I was not even sure about his name until I contacted him in Facebook (Buluk Kaniak).
Not only are the contents and outer appearance of his drawings different from those of Saala-Biik Soakatoa (cf. BULUK 13, pp. 89-91), but he seems to have quite different intentions. His main aim is probably not to create great pieces of art but rather to give a detailed insight into everyday Bulsa life.
Representing depicted persons in the pictures with their real names probably shows that he only draws scenes he has experienced himself. In my (F.K.) reproduction of his pictures, I have removed these names for privacy reasons.
The range of his subject matter includes religious rituals, life in a homestead and the work of its inhabitants, agriculture, and the activities of shepherd boys.
His pictures are composed of more or less locally-separated details. The main protagonists are surrounded by less important secondary characters (e.g. spectators) and, again and again, animals. In his depictions, there is hardly any overlap of people and scenes.

Fig. 1: Shepherd boys compete in a wrestling match away from the homestead (cf. Joseph Aduedem, BULUK 13, pp. 49-53). In the side scene a cattle egret (naapierik) is shown on the back of a cow, perhaps near the meeting point naakui.

Fig. 2: A woman has fetched water from a river with waterfowl swimming on its surface and cattle drinking at its banks. The woman has stumbled over a stone and is still trying to save the clay jug that was just on her head (as the falling carrying-pad, tuilik, proves) from breaking on the ground. The water of the jug splashes to the ground.

Fig. 3: Ba bora kaabi ka booluk (They are sacrificing to a shrine).
After killing a fowl (lying on the ground), an elderly man with a beard pours a libation (probably of millet water) over the shrine. Side scenes: A chicken drinking from a kpachari chicken trough, a man sitting on a dampala wooden bench.

Fig. 4: Kum ale ko ate ba bora a bo noi. After a death they perform the noi-boka ritual (with the death mat). The place of the action is the inner cattle yard, as the grain store with a tiili ladder and a stone foundation prove. The ritual officiant is standing in the entrance of the cattle yard and is asking questions to the mat to find out the cause of death (see BULUK 9, pp. 54-55). Mourning women are observing the ritual scene. 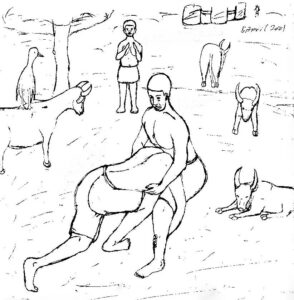 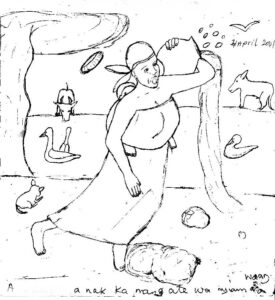 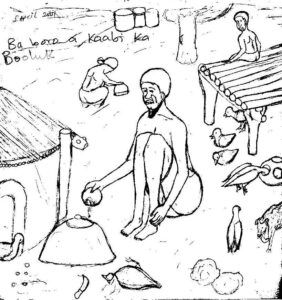 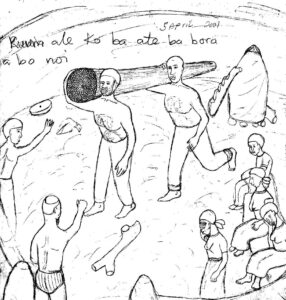