“…How can the clamour of sounds be still? There is no void where noises can collect and be made mute before they re-escape…!” (Linton Kwesi Johnson, British-Jamaican Dub Poet and Race Relations Activist) 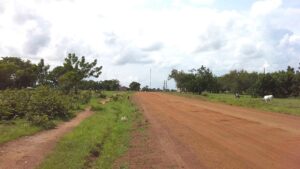 At Wiak-Gonsa I decide to make a pause from the long journey from Sandema before continuing to Gbedema. I visit one of my young friends, Evans Akangyelewon Atuick, the baritone voiced university lecturer and founder-manager of Wiaga United Football Club, and we go for a “pobla” lunch. While enjoying our high protein steamed bean-flour dish, we exchange bits and pieces on social and educational matters in Buluk. The young man is refreshing to listen to in his deep insight and engagement in these subjects. 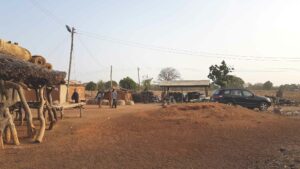 The open space (pielim) in front of the Gbedem-nab Compound. On the left: part of the kusung with dampala (seating logs); in the middle: ancestral shrines (bogluta); on the right: Ghanatta’s car 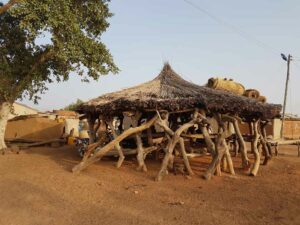