Rhythm of the War Dance

Some people’s warriors march in straight lines
Turn in sharp angles and come to a stop
By the command of the whistle.
But if you want your warriors to rotate
like bushes come alive in the savannah
If you want your warriors to crawl like the caterpillar
To twist, bend, dance, and charge
While melding into the landscape
Like a herd of the West African savannah buffalo
You need the critical nuance of the namuning*.
The namun-diak cuts sharply into the air in high notes
Calling for swift movement in stealth
But it is when the namun-nubi takes over
in deep tones that seem to be vibrating from the very depths of the earth
That the warrior spirit descends and slows down the march
In precise and determined steps to the rhythm
Of the war dance.

*Namuning– side-blown horn made from the horns of the antelope (namun-diak: male horn, smaller and with a higher tone; namun-nubi: female horn, bigger and with a deeper tone). 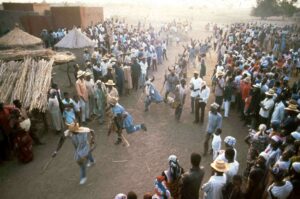 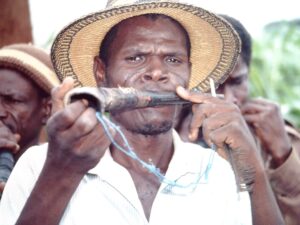