Franz Kröger: Good and Evil in Matter and Living Beings

Good and Evil in Matter and Living Beings 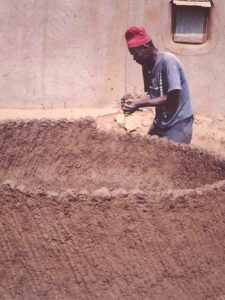 Contrary to Western perceptions, the traditional Bulsa do not consider matter as something value-neutral, but rather as a mixture of good and bad components. Man is not powerless in the face of this fact but at least tries to separate good from evil and to use only matter purified from evil for religious or important worldly purposes. Such a separation is not connected with an elaborate ritual or with verbal sayings. Sometimes it seems as if man is only trying to create the possibility for the separation to take place.
A good example of this is the short and inconspicuous manual activity of a Bulsa mason whom I observed in Wiaga-Badomsa while he was constructing a wall made of wet mud balls (voora, gulima, tampiga).

Before his son threw such a ball to the mason, he “cut” (gebi) a small ball segment off with the edge of one hand. The larger piece was immediately placed on top of the moist layer of mud underneath to build the ring-shaped wall of a granary (bui). In this way the mason (sieroa), who was also the head of the compound (yeri nyono), wanted to separate the bad matter or the evil within the matter from the good in order to ensure the success and durability of the wall (cf. Kröger 2001: 41). 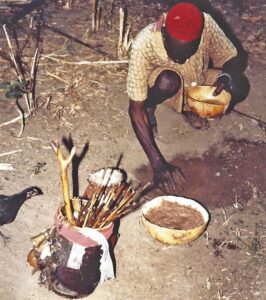 Digging a hole in the footpath

I observed a similar separation of a wet mass of mud during several wen-piirika rituals in Wiaga. In this ritual, usually young male or female Bulsa receive their first personal shrine (tintueta-wen-bogluk).

The diviner (baano), performing this ritual, dug a hole in a certain footpath with a hoe and added water to the excavated earth to produce a certain amount of moist mud. From this he formed a large ball of mud as well as three smaller ones which he then placed in the now-empty hole on the footpath.

Inserting feathers into the smaller mud-balls

Before the ritual with the small white chicken (see below), he plucked three feathers from this animal and put them, one by one, into each of the three smaller mud balls (Kröger 1978: 148). These balls no longer played a role in the wen-piirika ritual because they contained the evil components (wen-biok) of the excavated earth. The three chicken feathers had a similar meaning, i.e. they had absorbed all the evil from the chicken before it was used for a cleansing ritual. 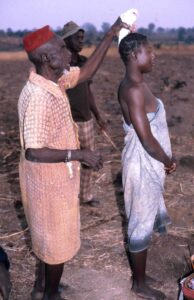 Rubbing the woman’s body with a white chicken

The chicken, which had just been delivered from its evil components and thus, along with its white colour and young age, was considered a symbol of purity. It was used immediately afterwards to absorb evil components again by rubbing it on the body of the human ritual subject.
The reason for a wen-piirika is usually due to previous illnesses, educational difficulties, quarrelsomeness or mental disturbances of the ritual subject (the wen-recipient). These disturbances of ordinary life were caused by a divine power, the personal wen, which had lived in the sun (wen) before the ritual. This wen forced the humans to build a mud-shrine for it in their compound. Before the ritual, the evil (biok) which was the cause of the above-mentioned physical or mental disorders is still in the body of the ritual subject. As the diviner is rubbinb the whole body of this person with the small white chicken, the evil passes from the person to the chicken, which can, of course, not be consumed afterwards. Rather, it is killed without bloodshed by beating it on the ground and then thrown away. There are no objections to its consumption by dogs.

At a tanggbain-segrika in Zuedema, moist earth also absorbs the guilt and offences of the ritual subject (Atenglie). After a cow sacrifice, “earth (tanta) is mixed with water to make a loamy paste and put into Atenglie’s hand. The name-giver now covers Atenglie’s eyes and tells her to throw the earth away, which Atenglie does. This ceremony is said to have a purifying effect. All bad things (Ayarik refers to them as ‘sins’) are removed from the child with the earth” (Kröger 1978: 81).

It is not always a good or evil constituent that one wants to transfer from a (more valuable) object or from a human being to a smaller, less valuable object. The constituent can also be more or less value-neutral. Before a Bulsa diviner (baano) starts a new session, the client takes two small sticks or blades of grass and holds them on or rubs them over the diviner’s bag (baan-yui). By way of this, all of the previous session’s problems still clinging to the bag are supposed to pass into the two sticks. Of course, one fears evil influences above all because tanggbana and witches/wizards also go to the diviner. This is also evident in the sentence that the client can speak during his activity: “Tanggbana, ti-baasa ale baan-bisanga ale jo fi jigi la, va la miena daungta ale n piiri a basi” (Earth spirits, bad medicine and “children [offspring] of the diviner” who have invaded you here, may all dirt disappear through my rubbing). After the rubbing, the client throws the two sticks/straws through the open door to the outside. 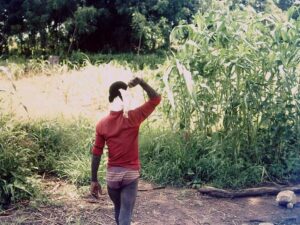 Throwing away the chicken

Cleansing rituals are performed in other rites (endnote 1). It probably has a particularly great significance in the kabong-fobka ritual (kabong: a type of adultery, fobi: to beat). A married woman who has committed kabong, the particularly severe form of adultery, with a clan member of her husband must undergo the chicken ritual in front of the compound together with her guilty sexual partner. Here it is particularly important that the chicken, after having been killed by beating (fobka) it on the ground, is not eaten by humans because this would transfer all the guilt back to the consumer.
The idea of transferring human guilt to an animal exists not only among the Bulsa. The most famous example is probably the Old Testament scapegoat ritual in which, by laying hands on a goat, the moral guilt of an entire group is transferred to the animal, which is then driven alive into the desert.
In other rites of the Bulsa, too, past experiences or events are associated with body parts, body dirt or excretions. In the frequently-occurring ritual baths, the washing off of body dirt (daung), which here is also supposed to include sweat and other bodily excretions, is associated with morally assessable deeds and events from the past. The ritual bath (soka) of the bride and the groom is not only performed for hygienic reasons. Together with the material filth, all previous sexual misconduct or premarital relationships are “washed away”. They should not even be mentioned by the partners afterwards.
During its growth, the hair on the head of the ritual subject has been linked to certain events in his/her life. In order to completely erase the influence of these events of her previous life in a rite of passage, the hair must be completely shaved.
In Bulsa rites of passage, this shaving usually takes place at the end of a phase which van Gennep (1909) has named “rites of margin”. After shaving the head (ponika) of a widow at the end of a funeral celebration, she is allowed to remarry, i.e. with this action the ties to the deceased husband are broken.
Following a miscarriage (bia-kaasung) and after a female circumcision (ngarika), the head hair is also associated with the painful experience of the past. As a reason for the head-shaving, a circumcised woman told me: “Ka ngarika zuesa la.” It (the head hair) is circumcision hair, i.e. it had grown before and during the circumcision.
Ideas similar to those presented here seem to exist among other ethnic groups in Northern Ghana. Ernst Haaf (1967: 154) reports about the Kusase:

Eine Behandlung der Pocken kennen die Kusase nicht. Man ist nur darauf bedacht, dem Erkrankten rechtzeitig die Haare zu scheren. Man nimmt nämlich allgemein an, dass die Krankheit, wie übrigens auch die Gifte, in die Haare steigt; würden diese nicht entfernt und sorgfältig vergraben, so gehe die Erkrankung auf andere Leute über. Wird das Haarscheren versäumt, kann dem Kranken, falls er stirbt, kein normales Begräbnis gewährt werden.
(Translation F.K.)
A treatment of smallpox is unknown to the Kusase. They are only concerned with shaving the hair of the sick person in time. It is generally assumed that the disease, like poison, gets into the hair; if the hair is not removed and carefully buried, the disease will pass on to other people. If the hair-shaving is omitted, the sick person cannot be given a normal funeral if he dies.

In the evaluation of the phenomena described here, the first thing that becomes apparent is the sense of otherness in perceiving one’s environment which the Bulsa do not regard as something purely material. At first glance, associations might arise about an animistic view of nature. But the view of nature described here has nothing to do with animism. Neither matter nor living beings are animated by spirits or souls that can be contacted and appeased by man through sacrifices, observance of taboos. etc.
However, perhaps the insight that every human being is neither purely good nor purely evil could have been transferred to lifeless and animate nature. The good and evil in matter and living beings are not seen as something absolute. Rather, they must be considered in relation to the human person who makes use of these things. Therefore, man can remedy the situation by simple means without this knowledge having led to an expansion of the religious cosmos.