THE TITLE AND POSITION OF THE SANDEMNAB – A DISCUSSION

The Title and Position of the Sandemnaab – a Discussion

1. Resolution Letter: A Document of the Bulsa Traditional Council 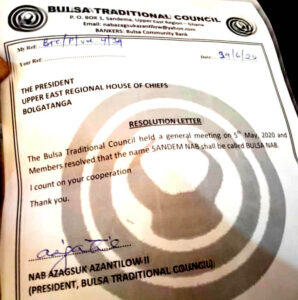 2. Basko Kante and Matthias Apen:
Letter to the President of the Regional House of Chiefs, Bolgatanga

July 20, 2020 C/O V20 SAKUMONO VILLAGE
SAKUMONO, ACCRA.
THE PRESIDENT
THROUGH: The Registrar
Upper East Regional House of Chiefs. Bolgatanga.
Dear Sir,
Re: RESOLUTION LETTER WITH REF. NO BTC/P/VOL. 4/39 DATED 39/6/20.
We refer to a letter as above entitled, purportedly signed and issued by Nab Azagsuk Azantilow II, addressed to “The President, Upper East Regional House of Chiefs.”
We are concerned as citizens of Bulsa, as well as our compatriots at home and abroad, and are utterly dismayed and disappointed by the contents of the letter above, which is without any precedence in the total history of our fatherland. The letter seeks to create and perpetuate authoritarianism, abuse of power and potentially create an absurd system that our forebears never countenanced; it smacks of the abuse of trust reposed in each Bulsa Chief by their individual villages, if ever they were complicit in the decision attributed to them, in which thankfully none was. To state it bluntly, our investigations bear testimony that there was and has NEVER been any occasion or meeting at which the twelve remaining chiefs (who together with the author of the above quoted letter convened the Bulsa Traditional Council or any appropriate number of them that meet the House quorum requirement) met for that purpose and arrived at any such outrageous decision. The contents of the letter are not only untrue and self-serving they are at best, a capricious attempt to impose the author’s grandiose and ambitious schemes of “Super-Chief” on the good people of Bulsa, which is bound to meet the collective resistance of our people. The author’s request to be ‘known and called BUILSA NAB’ instead of his proper and appropriate title of Sandem Nab is misplaced, misleading, and capricious for the following reasons:
1. Nab Azagsuk’s request to be known as BUILSA NAB is without any historical precedent in the Annals of BUILSA history and culture.
2. Nab Azagsuk’s great, well respected, and wise late father, Nab Azantilow 1, whom he succeeded never made such mistake and or nursed any such huge ambition of desiring to be known as BUILSA NAB. He was content with his proper title of Sandem Nab until his demise and Chief Azagsuk appropriately so inherited him.
3. The Bulsa Traditional area consists of thirteen (13) independent villages, each of which is responsible for electing its own chief. Each is responsible for administering in-trust for his subjects the cultural affairs, including land, according to custom. Each of the chiefs so elected is co-equal in status but with the Sandem Nab being a ‘primus inter pares’.
4. Sandema is but one of the independent villages in the Bulsa State, which is solely responsible for electing its own Sandem Nab of which Nab Azagsuk Azantilow is the present occupant.
5. The people of Sandema alone elected Azagsuk Azantilow for themselves as their Chief in accordance with tradition upon the demise of his late father Nab Ayieta Azantilow 1.
6. The people of Sandema, one of the thirteen (13) villages of Bulsa, have the sole mandate to elect an appropriate person from amongst eligible candidates to occupy their Sandema skin. The Sandem people or electorate has no power or authority to elect or appoint a Nab or chief for any village or for the whole of the Bulsa State for that matter.
7. The independent status of the villages of Bulsa and their individual chiefs of the Bulsa Traditional area is akin to that of their immediate neighbor, the Kasena Nankana Traditional area, where there is no one superimposed Kasena Nankana Chief over all the others, as the author of the letter appears to portend.
8. It is obvious from the sequence of events that the Sandem Nab, Azagsuk Azantilow’s ultimate objective is to make all Bulsa Chiefs subservient to himself and to bring all the remaining twelve 12 villages under his control in Sandema and ultimately take or assume control of all Bulsa lands. Such an intent and or ambition, without reference to its implications and lacking any historical or traditional precedence and support, portents obvious conflict in a traditional area that has over the years enjoyed peaceful co-existence of its people.
9. The Sandem-Nab Azagsuk’s letter under reference is not only dubious in character and vexatious in content, it is completely flawed. The letter bears a non-existent date of 39/6/2020. Also, being an official communication of the Bulsa Traditional Council, the letter ought to have been appropriately communicated by the Registrar of the Council; the contents typed on the letter-head of the same and not the President on his letter-head, for he has personal interest in the subject matter.
The last straw that seals the series of comedies or misfortunes about the letter is its unfortunate and mischievous reference to a purported meeting of the Bulsa Traditional Council on 5th May 2020 at which “Members resolved that the name SANDEM NAB shall be called BULSA NAB” because No such meeting was convened and No such decision was taken. At best and with the greatest respect, the whole content of the letter is but a figment of imagination.
10. We respectfully make the following recommendations:
(i) An immediate withdrawal of the aforesaid letter.
(ii) Appropriate steps should be taken to confer Paramount stati on all the remaining twelve (12) chiefs of the Bulsa Traditional Area as it should be and as is in the case of the Kasena Nankana area.

3. Nab Azagsuk Azantilow II:
Letter to the President of the Regional House of Chiefs, Bolgatanga 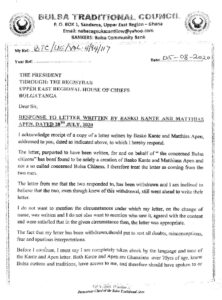 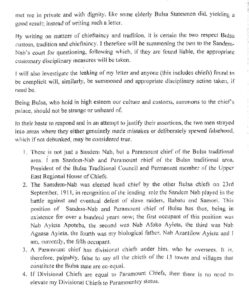 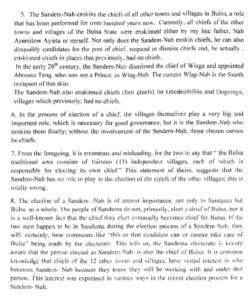 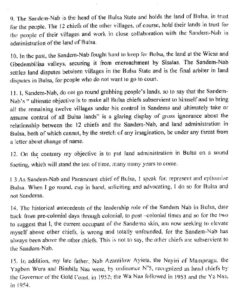 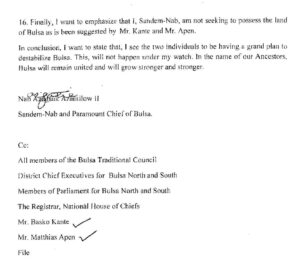